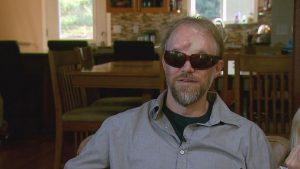 ANCHORAGE (KTUU) The worst day of Dan Bigley’s life was July 14, 2003. It was also the day he honors because it’s when he decided to live, and pursue his dreams of having a family after a vicious bear attack.

Channel 2 sat down with Bigley to talk about that day, 13 years ago.

This interview has been edited for length and clarity. Bigley also co-authored a book, Beyond the Bear, with Anchorage writer Debra McKinney which details the attack, Bigley’s recovery and how it shaped his life today.

Rebecca Palsha: “Tell me about that day.”

Bigley: “The last thing I said to her (his future wife) was ‘I’ll call you when I get off the river,’ as we kind of hugged goodbye and of course that was a promise I was unable to keep… It was one of those beautiful days in Alaska where the sun was out. It was warm enough to be in short sleeves but just enough breeze to keep the mosquitos down and the fishing was decent.

Palsha: “When did the bear attack?”

Bigley: “Before I’d even hit the ground she had a hold of my leg and was yarding me out of the bushes and then she picked me up and drug me off into the alders and that’s really where the mauling happened. The next time I woke up she had flipped me over and I was now laying face up and she had me pinned down to the ground she was standing over me with her front paws digging into either shoulder and her face over mine I definitely never forget those moments. I was really struck by the power and magnitude of her lungs as she huffed and puffed and growled and then she delivered to what I refer to as the death blow,m where she cocked her head sideways and bit down on across my face from side to side and then chewed.”

Palsha: “How long did the attack happen and what happened after the bear left?”

Bigley: “It lasted a few minutes and I pasted out a few times. This last time I woke up it was very, very different. There was no pain. There was not terror. In fact it was almost serene and peaceful and I started to figure out where I was and instantly I was aware there was no shape or form. All there was was this brilliant bright blue light. I realized I was on a cross roads. On one hand there was a choice to let go of life, and that was it, and it seemed that was certainly the easy choice to make at that moment. And on the other hand was the choice to sort of fight, to hold on to life and that clearly seemed to be the more challenging of the two decisions.

Almost as soon as I realized there was this choice to make I had this image that came into my mind and it was an imagine of my mom. I don’t know why, but there she was from the waste up with this huge smile glowing like radiant, maybe happier than I’ve ever seen her, and she was smiling and waving to me and it filled me with this feeling, that in a moment, like that is the only feeling that could have made life worth fighting for. From that moment my life would be about taking one small step forward one at a time, never to look back and question that moment. I learned early on that just being alive wasn’t enough, that it was about finding the things in life that make your life worth living. And, for me, it was about love and marriage and family and a few other things like fishing. So I feel like I’ve been given a second chance.”

All locations closed on Saturday and Sunday